Journey from ego to heart, from fear to love

Spirituality has always been a journey from living in my ego mind towards living in my heart. Along the way there has been an ongoing shift away from fear towards greater love in my life. This has been very beautiful for myself and those around me.

The journey has often required a willingness to step into vulnerability; to feel fear of something and move towards it, to be willing to not know, to be willing to follow my heart even when my head says “is this OK ?”

Gradually my whole life has shifted to something I never would have thought possible 10 years ago and for which I have immense gratitude.

Recently while on retreat with Isira, I was able to open into pure being, pure love. That experience is worth describing because it has such valuable learning.

Moving from living in our egoic identity towards living from spirit, does involve a process. For a very long time, since I was a teenager there has always been a willingness to face myself. To see whatever issues I had or to see my challenging emotions and to seek counselling to move beyond them. I certainly have made thousands of mistakes along the way and failed many times. However the overall pattern was towards opening and growth. I have also had a willingness to work on meditation, to be still and sit with whatever comes, and to be present as much as I can in my daily life. Both this continuous self reflection and meditation have played an essential role in facilitating the ability to awaken.

In October 2017 while on a beautiful retreat with Isira near Uluru, I first started to be able to enter a state of “emptiness” during meditation.Emptiness enabled me to see that we are much more than our physical body and the identity we focus on. We are also spirit/consciousness and in this space we are connected to the entire universe and beyond, because everything is that. When I came home from Uluru it was about practicing being in that space of emptiness.This was challenging because of something called resistance.

How fear and resistance arises

Resistance is a fear based desire to withdraw from spirit or awareness, mainly because we fear rejection. We think we are unworthy,even though in truth we have never separated from God or essence. We are already that, we just don’t see it.

Also the ego doesn’t want to face challenging emotions or conditioning that may come up when we open and it definitely wants to hold onto it’s identity . So I noticed a continuous desire to want to close again, to be safe and not vulnerable.

We need to be willing to step towards vulnerability

Always the work was to be willing to be open, to be vulnerable. Sometimes I succeeded and sometimes I didn’t. However if the willingness was there and forgiveness for closed moments, the overall progress seemed to be towards openess. So it became possible to stay in that place of emptiness for short periods of time.

I knew there was a deeper opening beyond emptiness, because I had touched in on it at Uluru. However it was so overwhelming at the time, the mind wanted to withdraw. Some call this opening, beingness or pure love/light .It is the love or consciousness that is the source of everything around us.

In the weeks leading up to Isira’s March 2018 retreat in NSW I felt an increasing momentum towards greater opening. I felt Isira’s facilitation of my process during that time even though she was in NSW and I live in WA. Isira says “consciousness is everywhere”. If a being is deeply living within consciousness as she is, boundaries like position and time don’t have much meaning. In consciousness we are all connected all the time.

From the first evening of the retreat I started to be aware of the light. It is an essence of pure love that is at the core of everything. It was both incredibly beautiful and incredibly terrifying. My heart was wanting to dive in and my mind/ego was desperately wanting to escape. The ego part of me started to have very negative thoughts towards Isira. I mentioned this to her and she told me that it was not uncommon for enlightened beings to experience  “murderous thoughts” in the prelude before enlightenment. This made me feel a little better, not that I was having murderous thoughts at that stage.

Facing the dark and the light ,knowing there is only unconditional love

Over the next few days there was gradually more and more beautiful opening towards light. However the ego became equally terrified and the resistance great. There was a moment during meditation where it felt like I was faced overwhelmingly with a choice to move more deeply into the light. At precisely that moment  immense fear arose that somehow I was not enough. Somehow I was too “bad” that I was going to be rejected. So my mind internally said to consciousness in the form of Isira, “I will prove to you how bad I am and then see if you reject me.” For the next  half an hour I really did have murderous thoughts towards Isira/consciousness. I just had to watch them passing through my mind, half of me engaged with them half of me stepping towards the light.The thoughts were more dark than I have ever experienced in my whole life . It’s like I was testing consciousness/Isira, really seeing if the love would flinch when my darkness arose.

Amongst all of these dark thoughts, I was feeling the love emanating from consciousness/Isira. Despite everything that I was throwing at her the love only increased, there was not even the slightest flinch it just grew. Overwhelmingly then I knew that it didn’t matter what I did , what I had ever done or what I could do in the future, I was always loved. Actually I was and never have been separate from that love. Now I totally understand the biblical story of the prodigal son who was lovingly welcomed home (love/awareness) despite having left his father (awareness) and misbehaving.

Slowly I was able to let myself enter into the light. At first my whole body was shaking, in equal parts terrified and blissful, but it gradually lessened. I was able, with many tears of joy, to settle into being. I clearly know now, at an experiential level, that we are the light. At the core we are love, we are consciousness. I know that fear itself, the desperate fear I was feeling of somehow not being enough, has never been real. Fear is part of the mind ego identity we all cling to. Though it feels real there really is no reason for it, because the consciousness that we truly are, is love.

As we shift towards love we lessen the collective fear

I was told later that the ego/mind is a collective and not all of those dark thoughts were entirely mine. I had a sense  that the more humans who are willing to keep stepping towards love the more we shift a collective fear on this earth. It felt like that whole process was healing not just for myself but for the entire collective ego mind.

The entire retreat was very beautiful, I experienced depths of love I had never felt before and way beyond my previous experience. In that place of love I felt connected to everything and a feeling there could never be a sense of not enough or separation because it was so overwhelmingly whole.

The vibration of love is ever deepening

My whole body has felt an increasing vibration of love ever since the retreat,even though the depth of the experience has lessened. In meditations now I can sit in love/ beingness for periods of time, much more comfortably than before. However naturally the mind/ego is still there and there is a way to go. The mind still wants to withdraw from being in that space and there is ongoing work to keep opening. Even more beautifully there is a desire to share love with the world and all I come into contact with. I do not get that right every time, sometimes if I am caught in a moment of resistance I will still close a little. However love is growing all the time.

Our core fear is that we are separate from this love, we never have been.

I really understand now the central fear for all beings caught in mind/ego. I see this in every client that walks through my door for counselling. At the core there is always some sense of not enough or guilt. This creates fear that we will be rejected or that we are separate from love. That fear controls our lives. If we really tune in we can see how much fear has made us withdraw or defend, perhaps in our work or social relationships. When really all the time we already are love and entirely lovable. If I am really love itself whilst overwhelmed with fear and having the most dark thoughts I have ever had, so are you. All we have to do is accept fear and step through it to offer the world our beauty. The darkness that is in all of us is created only by those core fears. Once we can acknowledge our darkness with absolute acceptance we can start to focus on love.

You have the courage and wisdom to keep going, always gently

Everything that happens in our lives is the choice of our deepest self, so we might as well open up to the wisdom life is offering. It does not matter in the slightest how often we slip up or fail, what matters is the courage to keep going, not so much with forceful trying but rather gentle compassionate application.Then the journey towards love will continue. Really we are all the same, the fears that came up for me and that are still there in a smaller degree, are no different to the fears of every human. So we might as well accept ourselves and each other and move towards love.

My deepest acknowledgements go to Isira who facilitated everything I have described. For the last few years she has been my teacher and I am immensely grateful for the unconditional love she has shown me and for the loving service she offers to the world. Namaste Isira. 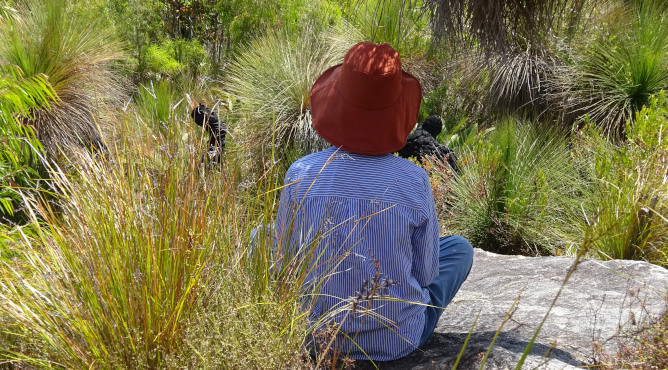